Posted on May 17, 2018 By gunpowderandgraphite

One of the challenges many of us face is how to find time to hunt while balancing the responsibilities of adult life. This time of year I can sneak in a few hours in the morning before getting off to work. It helps that I have some hunting areas that are within a few miles of home, including Vermont’s Green Mountain National Forest.

Much of the GMNF is not prime turkey cover, but it’s not necessarily bad either. Much of it is open hardwoods, but there isn’t much for mast other than beech. The area I’d selected is one I am familiar with but I’d never hunted turkeys there before. My plan was to hit the woods at 5am  (about 15 minutes before shooting light) then start calling and walking. I reasoned that staying at a lower elevation would be best, partly due to my time constraint but also due to generally better habitat.

The woods were quiet but for birds singing. After finding a good tree to sit under I made my first call at 5:15. I’ve had bad experiences in the past with turkeys coming in silent, so I waited 20 minutes before moving on. I was on my third tree, a massive, antiquated maple when, just before 6, I heard something. It sounded sort of like a gobble, but I really wasn’t sure and it could have been something altogether different. 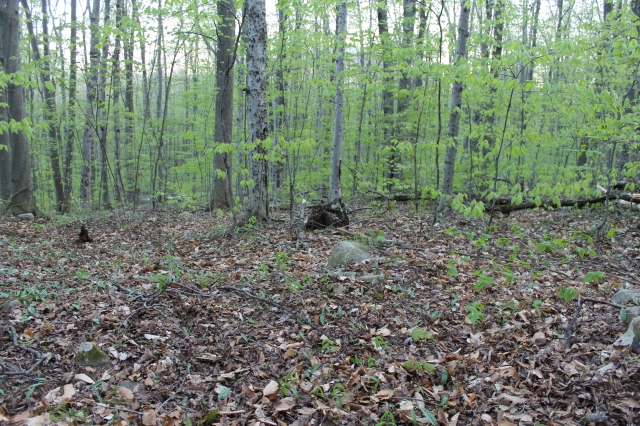 The view from the large maple I was sitting under.  The gnarly beech tree just off-center is 8 yards away.  The tom was about 6 or 7 yards beyond and to the left when I shot.

A few minutes later I heard it again but this time it was definitely a gobble, and only 100 yards or so away. I waited a moment before calling. No response. A couple minutes ticked by before the next gobble, combined with a hen yelp right on top of it. If that tom was with a hen my only real chance was to call aggressively and persistently. I waited a minute then hit the call with a loud, long yelp. Another gobble followed shortly. It went like this a few times, with the tom eventually gobbling in response to my call. He sounded like he was moving closer.

Thank heavens for the dry conditions. To my right, the direction the birds were calling from, was a thick patch of beech saplings. Anything in there would have to be 20 yards away before I’d see it. Of course, that was the most likely direction for them to come from and indeed they did. I heard them walking for at least a minute before I ever saw them, giving me plenty of time to adjust and raise my Remington 870 Magnum Express to my shoulder.

I saw two heads bob into view. I don’t know just how many birds there may have been, but I only saw the two. I lined up on the lead bird as soon as I saw a beard, keeping track of the other to keep it out of the line of fire. It moved momentarily behind a gnarly-trunked beech. When it’s head came out from behind I made certain it was the same bird then hit the trigger, introducing it to two ounces of Winchester #5s at all of 15 yards. The tom went down immediately, the other bird flew off.

I was awfully pleased to have just killed my first Vermont turkey, particularly after a gap of several years without getting one anywhere. As for particulars I shot him at 6:15 am, the beard measured 9 3/8th inches and he weighed about 24 pounds. As I walked out of the woods, my bird over my shoulder, I couldn’t have been happier. Even though I still had to go to work.